skip to main | skip to sidebar

Eating My Way Across Kauai

I love to eat, so I'm going to temporarily hijack this blog with some dining recommendations from our recent vacation in Hawaii.

We just got back from almost two weeks in Hawaii. My favorite part of the trip was eating my way across Kauai and Oahu. In planning for the trip, I got a lot of good tips from food blogs and other internet reviews, so I'm going to pay it forward by reporting on our dining hits and misses. This post will cover Kauai, and the next post will cover Oahu.

Be aware that many of these places take cash only. 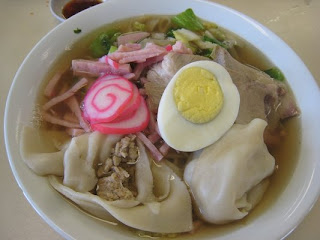 Hamura Saimin Stand (Lihue, close to the airport): This place is a dive...and I mean that in the best possible way. It's old, run-down, hard-to-find, and tiny, so you'll probably have to wait for a few minutes. But the food is amazing, not to mention cheap and plentiful! I'm a huge fan of ramen (the real stuff, not the dried packages you find in the grocery store) and Hamura serves some of the best you'll find this side of Japan. The “special” (shown to the right) is a huge bowl filled with wonderful noodles and broth, and then topped with char siu (roast pork), won tons, fish cake, ham, green onions, cabbage, and a hard-boiled egg. The bbq sticks (beef or chicken), crispy wontons, and lilikoi (passion fruit) chiffon pie are also excellent, but be aware that they run out of the pie. Seating is at a single zig-zag counter, so be prepared to chat with your neightbors. 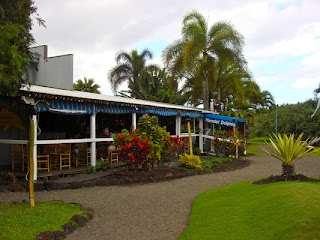 Hanalei Dolphin Restaurant (Hanalei, on the right as you first drive into town): The best “fancy” meal we had on the trip. I had the shutome (broadbill swordfish) and my wife had the walu (Hawaiian butter fish). The shutome was among the best fish I've had in my life, and the walu was almost as good. Both were simply grilled, and then served with a slice of lemon and some drawn butter. The butter, in particular, was a revelation for me. Sure, you often see it with lobster and the like, but usually not with fish. After experiencing how much it enhanced the fish here, I'll have to ask for it at other places. 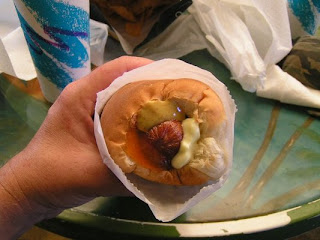 Puka Dog (Poipu, inside the Poipu Shopping Village): My son LOVED these, declaring them almost as good as my father's sweet-and-sour chicken wings, which is his high-water mark for non-dessert foods. They take a huge unsliced bun, and stick it onto a big spike, which both makes a hole for the dog and toasts the inside of the bun. They then put some toppings in the hole, fill the bun with a polish sausage, and add some more toppings to the tip of the sausage sticking out of the hole. Okay, the hole thing is a gimmick, but where they really shine is the toppings‒six different fruit relishes including mango, pineapple, papaya, banana, star fruit, and coconut (mango and pineapple are probably the best). They also include a mayonnaise-like “garlic lemon secret sauce”. 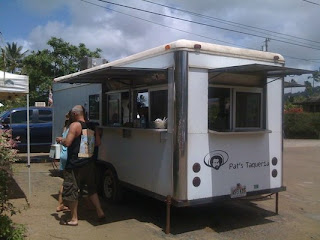 Pat's Taqueria (aka Pat's Taco Wagon) (Hanalei, by the base of the pier): On the mainland, lunch wagons are usually nothing special, but Hawaii has a tradition of great food served out of trucks. Pat's Taco Wagon is an excellent example. My first visit, I had the kalua pork burrito, which was very good. My second visit, I had the carne asada taco, which was mind-blowing. Both were kind of drippy, so be sure to lean over when you eat them. 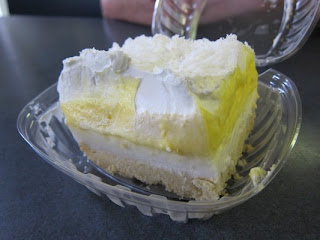 Village Snack & Bakery (aka The Snack Shack) (Hanalei, in the back of the Ching Young Village Shopping Center): My favorite dessert on the island, vanilla haupia pie. Mmmm! If you get there early in the morning, you may also be lucky enough to get their fried mochi (three balls of mochi with a sugary coating on a stick). Their loco moco (a Hawaiian tradition with two scoops of rice, a hamburger steak, and two fried eggs, covered with brown gravy) and teriyaki beef sandwich were also outstanding, but the pancakes and apple cobbler were only so-so. 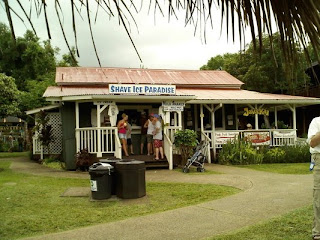 Shave Ice Paradise (Hanalei, across the street from the Ching Young Village Shopping Center): Shave ice is everywhere in Hawaii. Think giant snow cone, but made with shaved ice instead of crushed ice. The difference in texture is substantial, smooth instead of pebbly. You have a choice of many different syrups, and can add on ice cream underneath or sweetened condensed milk on top. The ice cream at the bottom didn't do much for me because you end up eating the top half of the ice without it, but the sweetened condensed milk on top (sometimes called a sno cap) is fantastic, changing what can sometimes be sickly sweet to sweet and creamy. Shave ice stands are very common, and there's not necessarily a lot of difference between them, but this one was the best we tried. 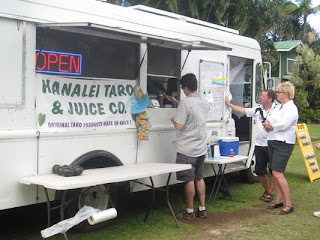 Hanalei Taro & Juice Company (Hanalei, in front of Kayak Kauai): Another lunch wagon. Plate lunches are a Hawaiian tradition with two scoops of rice, macaroni salad, and some kind of meat. I had the kalua pork plate lunch, which turned out to be the best kalua pork I tried on the island. The plate lunch also came with a little slice of their mochi cake, which is very good. They are famous for their smoothies, with use a taro base in addition to various combinations of fruit. My smoothie was good, but nothing special. The downside is that it's hard to find them open! I think they move around, but I didn't know where to look other than their main location.

Kountry Kitchen (Kapaa): Gigantic macadamia nut pancakes, which were fantastic with coconut syrup. I had the special loco moco, which had kalua pork instead of the usual hamburger steak, and it was very good also.

Bubba Burgers (Hanalei, across the street from the Ching Young Village Shopping Center): Try the teriyaki burger with pineapple. These are fast food burgers rather than restaurant burgers, but still good.

Lappert's Hawaii (Princeville, in the Princeville Center): Good ice cream with unusual flavors. I'd say good, but not great. Both Kilauea Video and Ice Cream (in Kilauea) and Pink's Creamery (in Hanalei) sounded better to me, but we didn't get to try those.

Banana Joe's (Kilauea, just off the highway): I didn't go, but my family loved their frostees. They also had some great fresh fruit, including lychees and “apple bananas”.

Mediterranean Gourmet (Hanalei, way past the main drag, almost to Haena, at the Hanalei Colony Resort): We ate two lunches there, with good gyros, falafels, and chicken kebabs. We also went to their once-a-week luau since we were staying at the resort. The food at the luau was only so-so, but the entertainment was fun, if much lower key than many of the fancier tourist luaus.

Bar Acuda (Hanalei): We were disappointed in this highly recommended tapas bar. The food we had there was good, some of it excellent. The problem is that their menu is just too limited, with only about a dozen choices for tapas. After running through everything we wanted to try out of their tapas offerings, we proceeded down the street to Bubba Burgers because the kids were still hungry.

Bouchons Hanalei (Hanalei): Nice atmosphere, but mediocre food. I did not try their sushi, so maybe that's better.

Puka Dog is, in my opinion, THE best hot dog on the planet. We have actually planned our Kauai visits around how many times we can go to Puka Dog. The lilikoi mustard and pineapple relish with the hot volcano sauce...OMG. And I also recommend the fresh salsas in the fridge at Banana Joe's -- the pineapple salsa is among the best salsas I have ever tasted...and I taste a lot of salsas!

The Moloa'a fruit stand between Anahola and Kilauea is one of my favorites. Looks like you didn't make it :-(.

Also the ice cream at Kilauea video is DELICIOUS. I have never had better ice cream in my life.

Why didn't you post this earlier to get the recommendations from your blogreaders before we left Kauai? Now I wish we'd gone to Kilauea video and that I'd had the pineapple relish!

Also, the amazing thing about Banana Joe's is that the soft serve "ice cream" is just bananas... Yum!